Some airports are seeing a steady increase in traffic over the past few weeks, and airlines are reporting the greatest volume of travelers since last year before the pandemic. With pent up travel demand, various factors may continue to influence this trend, such as greater vaccine distribution progress, flexible quarantines across some states, and more news of relaxed travel restrictions internationally. As travel continues to return, it should only serve as a reminder of peak travel days and likely airport congestion entering the spring and summer season.

During peak travel periods, frequent business travelers can avoid the crowds at larger airports. Unlike major airports, flying from smaller or regional airports dedicated to general aviation and FBOs can make for a hassle-free experience. While smaller airports thoroughly safeguard with best practices for Covid-19, private travelers bypass time-consuming airport lines and security checks with expedited boarding of aircraft. These airports typically do not have scheduled airline flights, and are perfect for charter travel as they allow more flexibility around timetables due to having more available aircraft slots. Very often, these airports offer superior facilities, amenities for group travel also, compared to the main airport hubs.

Regional airports are quite often nearby to suburbs and economic downtown areas.  By chartering a private jet to the more convenient smaller airports, you can access business areas in any city much more easily and directly. A major benefit private jet charter allows companies is to arrange for regularly scheduled flights on corporate shuttles according to their own custom flight plan. With corporate shuttles, you can book nonstop flights from point-to-point, even where there may not be direct flights or normal commercial airline service otherwise.  Along with the benefit of time savings and efficiency, the overall travel experience is greatly improved for those traveling, eliminating the need for connecting flights between points, lessening the chance of unexpected delays, and reducing any unnecessary exposure in overly crowded airports. For corporations that require employees to travel, this serves as a valuable solution to help maintain safety.

Here are a few top private aviation airports for accessing some of the most popular cities for business. 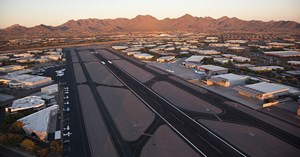 Scottsdale Airport is currently one of the top airports for general aviation, and has the second busiest runway in the nation. The facility does not have commercial airline service. Scottsdale Airport is home to numerous corporate jet aircraft. During the summer of 2021, the airport will be closed to aircraft for a runway renovation project.  Key industries in Scottsdale include tech, finance and insurance, real estate and rentals, health care and social services, and food.

North of downtown Miami and Brickell area, Opa Locka Executive Airport is dedicated to the business aviation in the South Florida area, with light cargo traffic to the Caribbean and South America, and immediately accessible via major highways. With of mix of chartered flights for business and leisure, OPF provides perfect access to Miami’s perfect setting for meetings while avoiding the hustle of the main commercial airport.

Situated in the New Jersey Meadowlands, Teterboro airport is a 30 minute drive from Midtown Manhattan, the largest central business district in the world. Being this close makes Teterboro Airport a perfect arrival and departure point for private jets and corporate aircraft traveling nationally or globally. Getting to time critical meetings at the New York Stock Exchange, making a special appearance on late-night shows in Rockefeller, or attending major Broadway events, Teterboro is a top-choice for high profile travelers, executives and celebrities quick needing quick access to the busiest city in privacy.

San Jose Airport (SJC) offers much quicker access to the Downtown San Jose area Silicon Valley with only a 10 minute drive. Unlike other general aviation airports for the San Francisco Bay area such as Palo Alto Airport and Oakland Airport, SJC does cater to scheduled service commercial flights, however far less hectic than SFO, and still offering private terminal access. 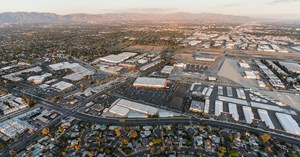 Dedicated to non-commercial travel, Van Nuys Airport is one of the busiest general aviation airports serving private, corporate and government flights. Also, being in the motion picture capital of the world, Van Nuys has hosted numerous celebrity flights and film shoots.

Peachtree-DeKalb Airport provides hassle-free access to Atlanta, one of the top southern U.S. cities for meetings and events.  Like other smaller airports on this list, does not have scheduled airline flights. Though a smaller airport, based on the number of flight operations, PDK is the second busiest airport behind Hartsfield-Jackson Atlanta International Airport and 11th busiest airport for corporate jets.

A privately owned Hooks Memorial Airport is one of the busiest general aviation airports and Texas and the U.S. This airport is close  proximity to downtown Houston supports government aviation. A great choice for business charter flights for small-engine to heavy jets and corporate aircraft needing to make it to the central business district.

King County International Airport, also known as Boeing Field, is the closest airport to the city center of downtown Seattle, south of Georgetown. Used mainly for general aviation and cargo flights, the busy nonhub airport also serves smaller commercial passenger flights and home to military and corporate planes. Based on its prime location to Seattle, the airport oftens sees the like of sports teams, high profile individuals, celebrities and dignitaries.

View more airports in our Airport Guide for additional information. Also, it is recommended to contact a member of our team to ask any questions about chartering private aircraft based on your itinerary.  Our aviation experts can help you plan your flights and fly privately to any of your preferred airports.

As companies return to business travel, find out how our private aviation services align with your plans. We can create customized solutions for managing your business flights based on any specific travel requirements.

As we look at the current travel landscape for leisure and business travel, here are few key market trends for private aviation and what we expect during 2021

Despite sporting events not being back into full swing, there are a few events & teams which are back taking center stage globally. What are the benefits of group charter travel for top sports teams during COVID-19?